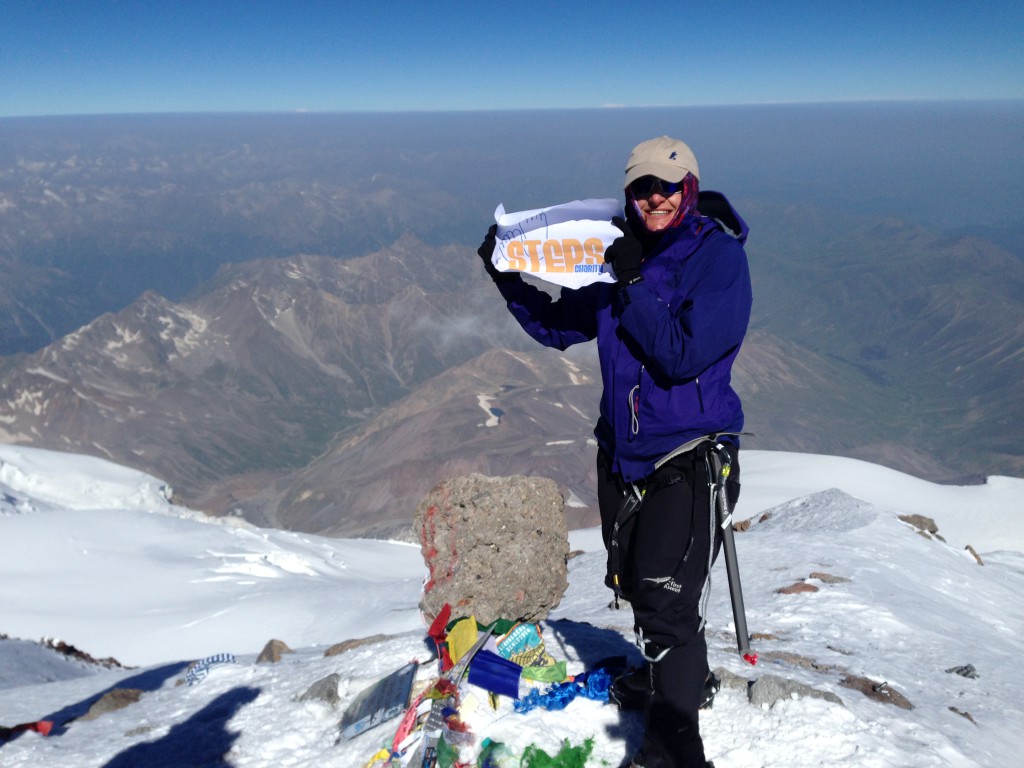 We planned to summit on Wednesday 16 July. We had spent the morning learning how to fall down the mountain slope headfirst, sideways and backwards, while remembering to keep the legs up so not as to let the crampons dig in and keeping the ice axe at such an angle so not as to stab yourself when trying to self-arrest down the steep mountain slope. All very reassuring, obviously.

The afternoon was spent organising the number of base layers so as to keep warm and re-adjusting the kit. After a carbo-loaded meal we hit the sack ready for a 12:30am wake up call, 1:30 breakfast and 2:45 departure.

The night, although cold, boasted clear skies just short of a full moon. There was a nervous excitement within the team as we checked and re-checked the head torches, spare batteries, cameras, insulators for the water bottles so they didn’t freeze and snacks to keep the sugar levels up. We took a snow cat to just below the Pastuhova Rocks at around 4800m. And then the climb started. A very slow, rhythmic march of step, step, breathe, step, step, breathe.

Watching the sun rise as it cast a shadow off the one peak over the slope was too beautiful to capture in a photo.

Elbrus consists of two peaks – first a climb straight up from the rocks, and secondly a traverse across the slope, down into the saddle at 5400m and then up the next peak to the summit at 5642m. The traverse to the saddle was probably the scariest with a sharp incline straight down. Fortunately it was early dawn and we did this in the light. Although I am not sure whether it would have been better not to have seen how far down a fall might have been.

Ascending the second peak required being attached to a fixed line and the use of the ice axe to ensure we were securely attached to the side of the mountain as we navigated around rocks, snow and ice. 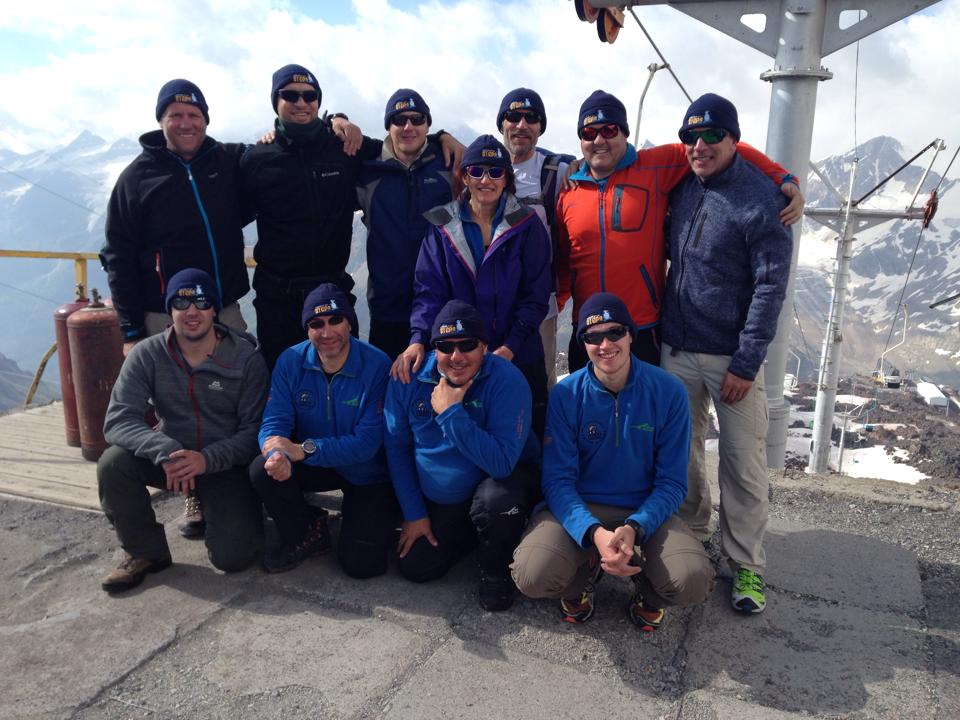 The peak was an elongated snow path demarcated by a large rock with a few flags and personal mementos left by others. We summited at around 7:20 am. No welcome mat or sign board announcing the top! But it was magnificent – I could see so far. We looked down on other snow-capped mountains and valleys. The team ribbed me as I had to have photos taken both with the STEPS flag and then with a photo of my family and then of course the team photo.

Summiting is only half of the journey. I am not sure what was harder – the slow step, step, breathe of the ascent or the fast, jarring-on-the-knees descent.

We took longer rests on the way down, admiring the view and marvelling at where we had just come from. We arrived back at camp at 14:00 to a warm meal, a couple of beers, loads of stories and, probably the most important – “So which peak next?”

Arriving back at the Hotel Povorot on Friday afternoon was pure luxury with the first running water and toilet in five days! Friday night we partied to the early hours of the morning with a German and Austrian team who had summited after us. We had an extra day in the Cheget region due to the contingent weather day. In true South African style, on the Saturday morning the guys managed to buy 10kgs of beef (although I am convinced it was mountain goat) and three chickens (for me since I don’t eat red meat) and we braaied. That evening we created our own party in the hotel’s dining room. What an amazing end to an amazing journey.

This climb was a very personal journey for me. Although supported by my family and friends, I had to train on my own, motivate myself to keep going and then, as the only girl, join a team of ten guys who I had never met before and live in extremely close confines with them.

Technically, this summit was a climb, learning self-arrest, walking in snow and ice with crampons and an ice axe was totally foreign and new to me.

My lesson from this journey, apart from the physiological challenge posed by altitude, is that most challenges in life can be overcome with preparation, discipline and the right attitude!