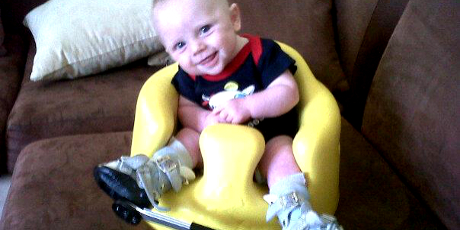 When we found out in May 2012 that we were having a baby brother for our oldest, Tannah, we were ecstatic. It was exactly what we wanted – until the 27 June 2012 when, during our anomoly scan, the doctor noticed something.

I immediately knew something was wrong by her demeanour. “Bilateral clubfeet,” she said to us. I felt like my world had been ripped out from under me. My husband and I had no idea what that meant. From there we rushed to our GP to get his opinion and he confirmed our baby’s feet didn’t look “normal”, but went on to explain what clubfoot is and how easily it can be fixed. He gave us Dr Mark Eltringham’s number and told us to go see him.

It was a long couple of weeks until we saw Mark, a month before our baby was due, to get a better understanding of what our baby had in store.

When he was born, we thought our baby boy Riley was perfect – even his feet. He had his first cast done at four days old and had seven weekly casts. I noticed a difference after just the first cast.

After this he had a double tenotomy and another three weeks of casts. Three weeks passed and the casts came off. The position of his feet were unbelievable; we were all so happy with the results.

We then received his first boots and bar which he wore for 23 hours a day for 12 weeks, until the day we got the good news that the time could be reduced to 14 hours a day. Riley flourished, he did everything his sister had done at the same age. He crawled at 11 months and walked at 16 months – only one month after his older sister reached these milestones – and this is all thanks to Ponseti. Riley is 17 months old now so we still have a way to go but he is happy, he runs and we are confident.