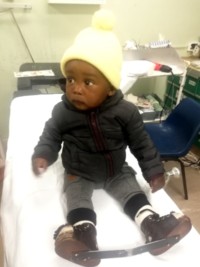 I found out in December 2017 that I was pregnant. I was so excited, and I prayed that it would be a boy. I went to see a doctor for my first appointment, who told me that the baby was fine and he didn’t see any complications.

On the 16th September 2018, I gave birth to my beautiful son Kuhlesibonge Radebe. I named him Kuhle because I saw a beautiful flower that will take care of me when he grew up.

When I gave birth, the nurse noticed that my child had a little problem – she advised that I go get the necessary checks. This is when I found out my son had clubfoot. They wrote me a referral letter to Grey’s Hospital, where I could get help.

At the beginning of January 2019, I visited Grey’s Hospital for my first appointment for my Kuhlekonke. I was very scared, but I met two people there, Ramessur and Phumzile, who gave me hope! 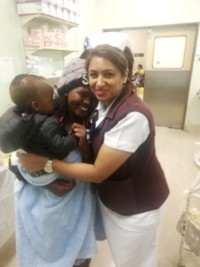 After one month, I was already seeing a difference in my child! It’s been a nice journey, from the casting, to the tenotomy, thanks to the amazing people at the Grey’s Hospital clubfoot clinic.

There have been no real complications. I found the brace was a bit of a challenge at first, but now I am putting on his brace at night only, it’s easier and he’s doing so well.

I’m so happy and proud of my Kuhle!

Click here to make a once-off or monthly donation