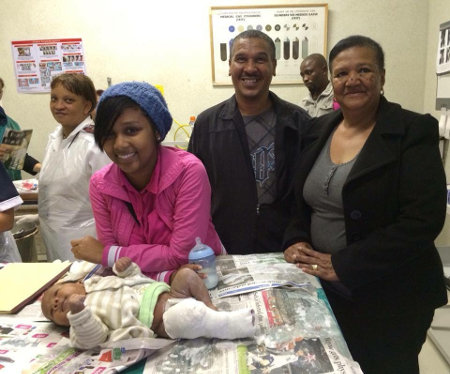 Grandparents start a new clubfoot journey with their grandson

We met baby Jordan at his first appointment when he was just three weeks old. Jordan has unilateral clubfoot. We noticed that there was quite a large family supporting Jordan. Grandparents Freddie and Linda were there, as well as Jordan’s mom and dad Luzzaan and Rowan.

“Our son Rowan who is 23 years old now and Jordan’s daddy, was also born with clubfoot.” Freddie told us. “So, when Jordan was born, we knew straight away that our grandson had clubfoot. Rowan had three operations on his clubfoot when he was a baby. He bled a lot, the first operation I remember was at one month old at Mitchells Plain private hospital. Then he had two more operations. It was really difficult for us as parents to see our son’s experience, and we were really worried when we realised that our grandson had the same condition as his father.”

Luzzaan and Rowan were also concerned about the treatment that their baby would need. “Jordan is our first child. We didn’t know until he was born that there was something different with his feet,” Luzzaan said.

“My dad was so worried!” said Rowan. “I don’t remember much about my treatment, but I know it was really hard on my parents.”

The family were sent from Mitchells Plain to the Red Cross Children’s Hospital where they were told to bring Jordan to the Friday clubfoot clinic at Maitland Cottage Children’s Orthopaedic Hospital.”

As we talked with the family, the casting team at the clinic finished manipulating Jordan’s foot and Luzzaan stroked his head as they applied the first plaster cast.

“This isn’t strange for me, watching the casting, but wow this treatment is way better than back then. My grandson isn’t even crying, he isn’t experiencing pain.” Freddie says. “Everything has been well explained, we know exactly what to expect. It is so good to have a parent adviser to talk to. What a blessing, we are very happy for our grandson that things have changed so much. Look at that! First cast on, and he isn’t even crying, he has fallen asleep!”