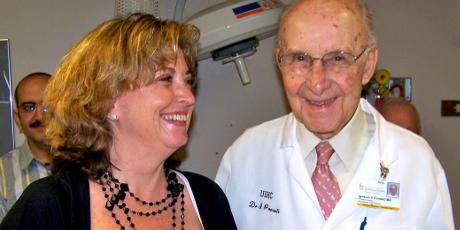 On a freezing snowy morning, 7 April 2003, my husband Steve and I were the first South Africans to visit Dr Ponseti at the University of Iowa Children’s Hospital.  We had made the scary, but life-changing decision to travel 10 000 miles with our 10-week-old son Alex for clubfoot treatment.

Dr Ponseti was excited to have his first visitors from South Africa.  He told us that Africa was close to his heart, particularly South Africa, as studies had shown that the incidence of clubfoot in our black population were higher than the world average.

While we were in Iowa, I called Dr Ponseti “the baby whisperer”.  If Alex cried with frustration (never pain) during his casting, Dr Ponseti picked our baby up and walked off down the passage with him talking softly until he was happy again.

Dr Ponseti told us that his method usually spread through the efforts of parents, particularly mothers.  He believed there was a special bond between a mother and her baby, and a mother knows what is best for her baby.

He gave us his book, which he inscribed: “To Alex, for a wonderful life, I.V.  Ponseti”. He put together a lot of information and a CD for us to take home to show South African doctors. I didn’t realise it then, but this was the defining moment that would influence me to take his message of hope for clubfoot treatment into my country to help other children.

I’ve never known another doctor like Dr Ponseti. He was wise, caring, gentle and humble, but very determined.  He had a very good sense of humour and was so passionate about his work. Dr Ponseti’s encouragement and support made me believe that I could do it – that I had to do it.

The success of Alex’s treatment and the inspiration of Dr Ponseti’s lifetime of work to achieve his vision are the reasons that I started STEPS in South Africa.

I will keep my promise to Dr Ponseti and continue working for as long as it takes until every baby born in Southern Africa with clubfoot has equal access to his method.