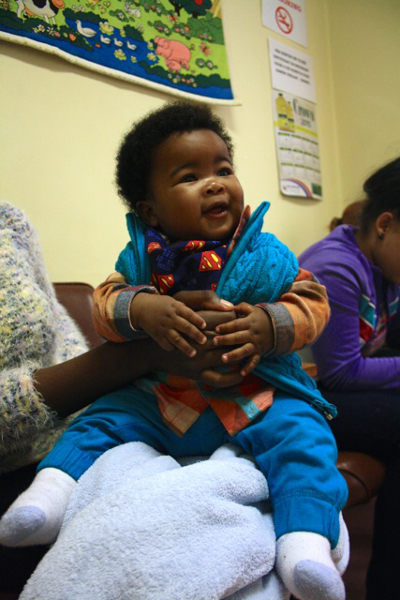 In Cape Town, STEPS has two programme partner clubfoot clinics, at Maitland Cottage Home and Tygerberg Hospital. Once a week, the waiting rooms are filled with parents and their clubfoot cuties coming for consultation, casting, or new boots and bars. Come along with us for a day at the clubfoot clinic!

In the waiting room

It is early Thursday morning at Tygerberg Hospital. In the clubfoot clinic waiting room, a colourful space filled with stuffed animals and toys, Shirley Mbuyazwe waits with her son Luhle, together with several other parents and children. Luhle is wearing his Superman scarf, looking like the superhero he is. Alethea Malan, STEPS’ parent adviser, comes in and asks mum Shirley how they have been. Shirley says Luhle’s boots and bars have broken so they are here to get a new pair.

The clubfoot clinic waiting room is where parents can meet and see other children at different stages of treatment. These meetings are really valuable, as parents and caregivers play an extremely important role in achieving good results with the Ponseti treatment.

“Parents are the ones who take the child to the clinic, deal with cast care at home, check for any problems, make sure the brace is on properly on for 23 hours a day in the first three months, and then commit to their child sleeping in the brace until age four,” STEPS founder and director Karen Moss says.

Because of the central role that parents play in the clubfoot treatment, STEPS raises funds for clinics that have no waiting room facilities to make them more comforting and welcoming. STEPS also provides refreshments for the families who have often travelled for hours to get to the clinic, and could spend a few more hours more waiting for treatment. Having a cup of tea and a bun together encourages conversation and is a good chance to exchange tips and phone numbers. It is also a safe space where a parent adviser can talk to parents in a comfortable setting.

After Shirley and Luhle have seen the doctor and got their new brace, Alethea gives Shirley a STEPS Ponseti for Parents© take-home leaflet with useful tips about the brace phase, which is still new for Shirley and Luhle.

“I just have to say, Alethea is so nice to talk to,” Shirley says. “She always has good advice and tips, especially knowing that she has a son with clubfoot herself. When I walk out of the clinic I always feel more confident in being able to give my son what he needs to get his feet straight.”

In Maitland Cottage’s clubfoot clinic, Pamella Mangamso Majikijela waits together with her son Lunzulu to get a new cast. Pamella and Lunzulu have been here several times before, but Pamella is still a bit anxious before the casting.

“He is always crying while he gets his casts on, but I know it gets better as soon as he is done and I know the doctors are doing a great job,” Pamella says as they enter the casting room.

In the casting room, the benches and the floor are covered in newspapers. Although the Ponseti treatment is a gentle one, the casting part can get a bit messy. The doctor and a medical student examine Lunzulu’s feet and write down the Pirani scores of his feet.

Later, the STEPS in-clinic adviser will enter this information on an online patient database that helps the doctors to track the treatment and follow up with parents. 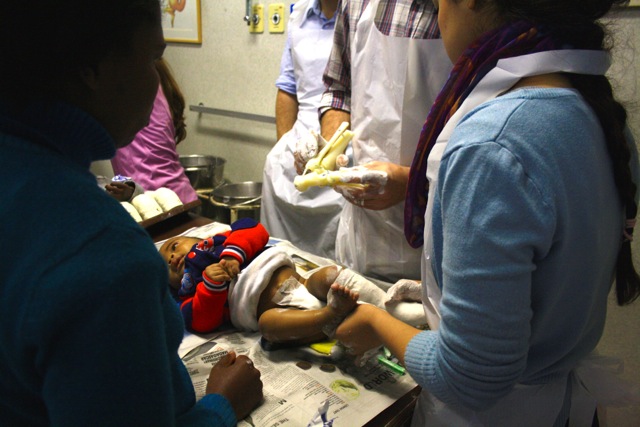 During the casting, the doctor uses a model of a clubfoot and an example of a cast to explain to both the medical student and mum Pamella what the next positioning of Lunzulu’s feet should look like. The student gently wraps bandages around Lunzulu’s foot while the doctor holds the foot in position.

Maitland Cottage Hospital has an active medical training programme and Tygerberg acts as a teaching hospital in conjunction with the University of Stellenbosch’s Health Science Faculty. This means there are often students participating in the procedures, as the Ponseti Method is part of medical school curriculum.

The casting is a relatively quick procedure and Lunzulu stops crying immediately after the doctor is done, just like Pamella said.

A long way to the clinic

Sharon Messent and her son have probably been travelling for the longest, having to leave home at 2am to be at the Tygerberg Clubfoot Clinic at 8am.

“The hardest thing for me is that we live so far from the clinic. Tygerberg is the closest hospital in my region that has a clubfoot clinic,” Sharon says, trying to keep Cirgio entertained with toys in the waiting room. They are both tired from the travel.

“In our community nobody talks about clubfoot and most people don’t know what it is or that it is treatable. There are also older children walking around with untreated clubfoot,” Sharon says.

“I don’t know what I would have done without the support from Alethea and STEPS, and the people at the clubfoot clinic. All I want is for my child to walk. I will do what it takes.”

Because of the size of South Africa, and because most clinics are located in highly populated areas, the more rural and sparsely populated regions are often far from these clinics, and the patients have to travel far for treatment.

This is the main reason for patient default and compromised treatment outcomes. Because of this, STEPS has identified a need for refresher training and the opening of more clinics, particularly in the northern and eastern regions of South Africa.

The #StepUp4STEPS campaign goal is to raise funds to help treat 10 more South African children who may not otherwise be able to access treatment.